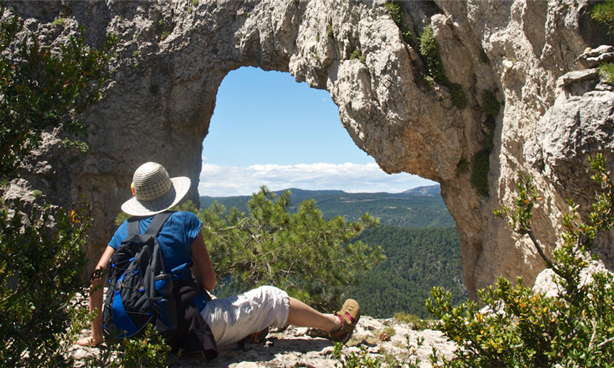 Not with exactly the same pretensions but with the same conception of romantic travel, I give myself alone, to my personal Grand Tour, to my journey on foot through the Sierra de Els Ports and Matarranya. What makes a persuasive argument?

The 18th-century youth launched themself in search for ancient beauty, embarking on an initiatory journey. They left to look for memories among the ruins of The Eternal City. Scratching the centuries-old walls of that Renaissance Italy, they pursued scholarship and a new way of conceiving art. They would constitute the romantic Europe and that trip was known as Le Grand Tour.

“Walking, without resorting to any other means of transportation than our own feet, without substitutes, allows us to experience life: relaxation, exercise, meditation, health, oxygenation of the brain, transportation, sport, non-violent protest marches, art and much more”.

Each image observed asked me about the mysteries of nature and my encounters would turn my fictions into facts during my journey on foot. The conjecture about sublime and beautiful found their definition and were exemplified in these territories of rebellious heart. I would decode aesthetic messages from contemplation of the ruins and the abandonment . If I were a poet, I would write a misty-morning ode about the towns of La Tinnença de Benifassa, even a sharp and concise couplet like a karstic gouge from Parrizal.

All those open-mind and satisfied-pocket aristocrats unearthed the goblin of the place, divine status of the space (Genius Loci) and figure being already present in the Renaissance. The need to melt whole essence of a place, and put into metaphorical inspiration reached music, painting, poetry, gardening. Upon his return those experiences were transformed into art works, romances or diaries. On my way, did they also do it like parched Mediterranean, an oasis of shade and a reward at the end of every day.

Without being able to find that goblin so harassed and manipulated today, I am able to define a couple of values: adaptation and genuine presence.

Solitary walking and wandering thought accompany me. I escape while ascending upwards Penyagalera along the route from Estels del Sud towards Beceite like a flâneur on his mental journeys and daydreams. Sudden encounters happen between my state of temporary euphoria and the outside world. All they stick around, especially the loneliness and introspection in those experiences of romantic travelers.

The best day hikes could be my aim. I opened the map again to locate these sceneries. The descent towards the river Ulldemó, the views over Beceite. There are several occasions that I have allowed myself to be carried away by this trip to the Ports of Beceite. They are places where not only the desire to escape fits, but also where to concentrate the maximum in the minimum: a space-time reference in the views from Roca Morera, a social contradiction at the borders of Tossal, the nostalgia of origin and the past time for those born in Fredes, Boixar, Vallibona. These are the landscapes of the Grand Tour that I propose. And having said this, I went on through a sentimental territory of bends, crossroads and limits.

Although I do try it, the copy of each emotion of the path never arouses the same feeling. It will never be like the original perception. I just introduce to the interest, as a muse of inspiration, in romantic thinking.

“You push the button, we do the rest.”

We all usually face 2-dimensional and static images, such as photographs and drawings, looking for the meaning of their messages. The figure of the well-known path, the reference, appears inside it. This will connect wild, architectural, historical places with the gaze and its arguments, and will compensate for obsessions such as the challenge, loneliness, silence: Coscollosa Gorge, Font Ferrera Refuge, Rafalgueri forest. The act of walking and its meaning, implies a non-physical but reflective transformation of the place. Today’s language, walking becomes the capturing, editing and retouching of the experience -from perception to interpretation-. Who was the last inhabitant of Mas del Ric? Did misery expel him either well-being?

Regarding this point, I especially like the metaphor used by Beruete in his Gardenosophy, where he associates a perimeter path around the garden with a seam that connects it to the surrounding landscape. The line determines the order and presence of the different perspectives to contemplate on. The action of walking can break that order as an act of rebellion, but also follow it by completing its suggestions. The Grand Tour is presented as a set of trails, a GR7, the Three Kingdoms tour, a walking holiday, a trek through La Tinença Natural Park, but all these cases and names offer the same thing, an only ride, your own one. You are in for a ride. !

Where should we recognize the main feature of a country? May it be an emotional fragment of time? The first point which truly astonishes us. Should we be all agreed on it?

Turning perplexity caused by geographic phenomena into information and integrating them into our own references, taste, decisions, analysis, etc, that is meta-experience. The metanarrative is the spirit of the place.

“Each landscape becomes the motifs of the spirit. It is like a written symphony, for those who understand it, poetic, full of interest; for those who do not, anything”.

I have already mentioned that in the 18th century, genius loci was reinvented as the inspiring muse of romantic art and again we are desperate to find it in every nook and cranny. Then there is a crack in the armour. Searching for the quintessence, the genius of the place, can be not only inspiring but also subversive, even manipulative. A new stage of capitalism based on business of time, culture and life experience -packaging cultural experiences and specially tourism.

Thomas Cook, visionary and pioneer among other things, was able to transform the cultural journey into an experiential one and he warned in 19th century that success would require a change of scene, the buyer-seller relationship into one of provider-user. Branding and mass access have led to a “dramatize and manufacture of evocative, uniform and predictable experiences” Rifkin, J. (2000) The Age of Access.

I do not dare to say that the earlier mentioned has meant the end, rather the direction of adaptability has not always been the right one. Enabling mass access to certain places strips them of their extraordinary feature and brings the commonplace closer to the wild – which is not the same as reaching the wild.

Still alone on my way to Vallibona. Vallibona is a white and shady village by pure contrast like an Andalusian white village. It also looks like brown because of ageing population. It has a tavern La Carbonera, where you can enjoy an excellent vermouth and better music though. Vallibona comes along suddenly on the valley floor and not on top like most of medieval villages here, and although it had a wall, it is by far an affectionate town than a bellicose one. We should say that it conceals itself rather than physically hide.

Step by step, the slow but sure revelation and also the feeling of anticipation, let me capture the atmosphere, who knows whether as inspiration or surprise. In fact it is difficult to focus on it from a psychological point of view. Which aspect of the landscape does seem larger? A wide expanse of space or the one that, being relatively small, I suddenly find when changing scale. Finally I see El Peirón Trencat and Morella already appears on the horizon.

Proximity and distance are the mental north-south of the voyeur and walker. In fact, the objects, depending on the position of the observer, are shown or hidden, providing richness to the place. The crossroads are another common place, another milestone to stop at, a physical-temporary point where emotion and watchfulness connect.

The Grand Tour will be observation but also movement, and the action of both, consciously organized or not, fuels emotions and behaviors. A new cartography comes out from an exclusively visual nature.

Undoubtedly, the territory of the Grand Tour is the result, by action either omission, of human activity in response to historical needs (social, economic, cultural) and its adaptation to environment. These have been happening ciclical over the centuries, generating a discourse of transformation and also of identity.

Concepts such as vestige, memory, restoration, monuments, past times, ruins, constantly appear in it, what give an idea of the fight against the forces of degradation and the awareness of what has been lost. The ruin’s maxim invite and inspire in contemplation. Their way of appearing, their presence and the power of annihilation they evoke, decontextualizes them from the ordinary and gives them an unusual value , the beautiful and the sublime.

The map coordinates for this Tour are psychogeographic limits. Every place will be another parts. There must be a course in the look flâneur?. A landscape voyeur takes buildings, roads and towns, and reliefs, as base units, but then looks beyond them to get the idea, the distinctive atmosphere of a place and the essentials, to create a timeless landscape.

“Without walking, I would be dead, and my profession, which I love passionately, would be destroyed. Because it is on walks that the lore of nature and the lore of the country are revealed, charming and graceful, to the sense and eyes of the observant walker.”

Check your concern and your agenda and start your personal Grand Tour. Even if you can’t see or understand the whole, create your apparent reality, your story. Finally I get into Morella through San Mateo gate.

Subscribe to our newsletter and stay updated on the latest news and special offers!